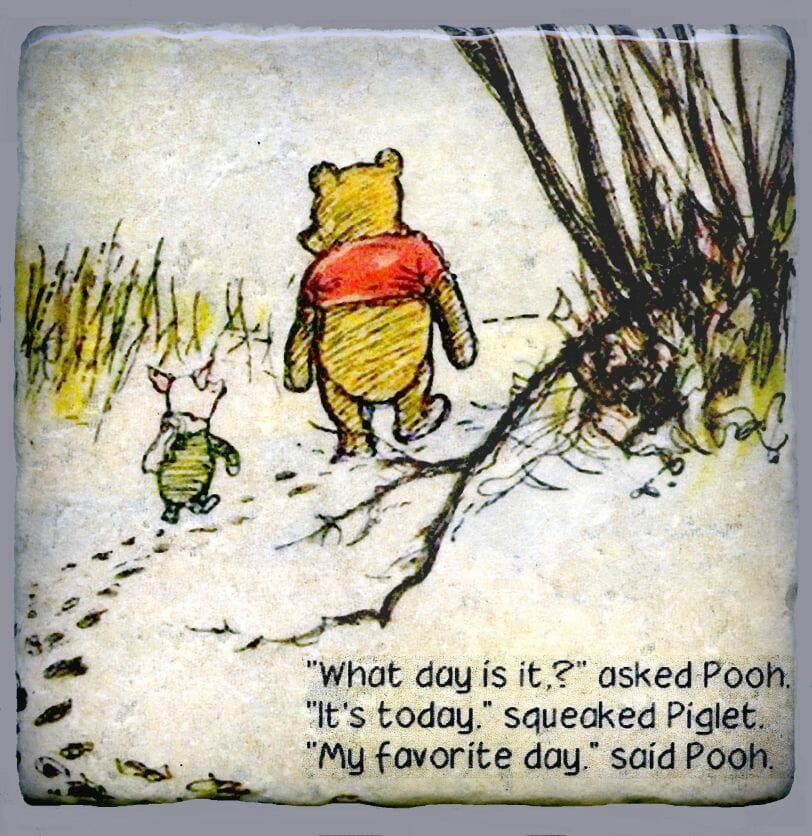 To celebrate the amazing bear of very little brain here are some fun and interesting facts you may not know for your kids…..

1. The real bear who inspired him, Winnie, was a Canadian female black bear.

2. Christopher, the son of Alan Alexander Milne received a teddy bear on his first birthday from his father. It was an 18-inch bear from Harrod’s department store in London, was originally called Edward and could growl! Milne and his son eventually renamed the teddy Winnie, after the black bear they went to visit at London Zoo.

3. The “Pooh” part of Winnie-the-Pooh comes from a swan that Milne and his son came across when on holiday. They called the swan Pooh, which Milne described in ‘When We Were Very Young.’; a poetry book by Milne published in 1924. Winnie-the-Pooh’s first appearance was as an unnamed character in this book – “A bear, however hard he tries/Grows tubby without exercise.”

5. The Hundred Acre Wood characters Owl and Rabbit were the only two that weren’t inspired by Christopher Robin’s toys. Instead their characters came from real animals on Cotchford Farm, the Milnes’ property in Sussex.

6. Kanga was a “he” in Milne’s original notes, but was changed to become the only female character in the books.

7. Christopher Robin’s original plush Pooh toys are kept in a bulletproof display case at the New York Public Library, and see about 750,000 visitors per year. They are extremely fragile and their environment is consistently monitored for temperature, relative humidity and light levels.

8. The only original toy you can’t see at the New York Public Library is Roo. Christopher Robin Milne lost it sometime in the 1930s in an apple orchard.

9. The reason Milne stopped writing children’s books, and especially about Winnie-the-Pooh, was that he felt “amazement and disgust” over the fame his son was exposed to, and said that “I feel that the legal Christopher Robin has already had more publicity than I want for him. I do not want CR Milne to ever wish that his name were Charles Robert.

10. Milne and his wife became estranged from their son, who came to resent what he saw as his father’s exploitation of his childhood and came to hate the books that had thrust him into the public eye

11. The Disney corporation now owns all rights to the books and stories. However, The UK copyright on the text of the original Winnie the Pooh books expires on 1 January 2027, at the beginning of the year after the 70th anniversary of the author’s death.

12. In 2014, a meeting was held in the tiny town of Tuszyn, Poland, to decide upon a new patron for a local children’s playground. Pooh was suggested, but then denounced due to his questionable attire (no pants). “It is half naked, which is wholly inappropriate for children,” said Councillor Ryszard Cichy.

13. 13. Remember how Pooh and the gang have a game they play called “Poohsticks”? Well, the Poohsticks World championships are held in England every year! Here’s how you play it if you are not familiar!

8 ways we can learn from our children….

Why reading with your kids is important for them and also for you!

Family Bucket List; 50 Fun activities & ideas to do with kids at home

Best places to go for days out with the kids…… If you are looking for inspiration for days out and place to go with the kids; from home or when you are travelling around the UK, on a family staycation or visiting family or friends elsewhere in the UK, check out our handy map for…

And why you shouldn’t worry what reading band they are on……. We’ve all had the feeling; it’s the end of another manic day, working, rushing around, taxi-ing children to various places, feeding them bathing them and you just want to get them to bed as quickly as possible but they utter those words “just one…

Meet our event host characters for our fabulous summer online treasure hunt events….. Ranger Ron is the expert on all things Dinosaurs!! If your kid loves all things Dino they will want to meet Ranger Ron, learn his Dino hunting skills and go dino hunting with him…..   Captain Pow is the trainer of all…

Sometimes as parents we can be focused on teaching our children everything we think they should know, telling them what we think, what they should do, taking them to non stop clubs and activities in the hope that they learn, learn, learn… and schools of course are being forced by the government to only concentrate…

As the days skip by and our children grow we become ever more aware of how precious time with our kids is and how quickly their childhood slips by. Yet our lives are busy, we have work, home and families to manage and days often seem short! There is so much evidence that shows that…

Is your child going a little stir crazy cooped up in the house during the Covid-19 lockdown? We all are a little bit, but it’s even harder to keep children motivated and focused without a school playground to let loose in or friends to talk to. But should you give up on helping them learn…