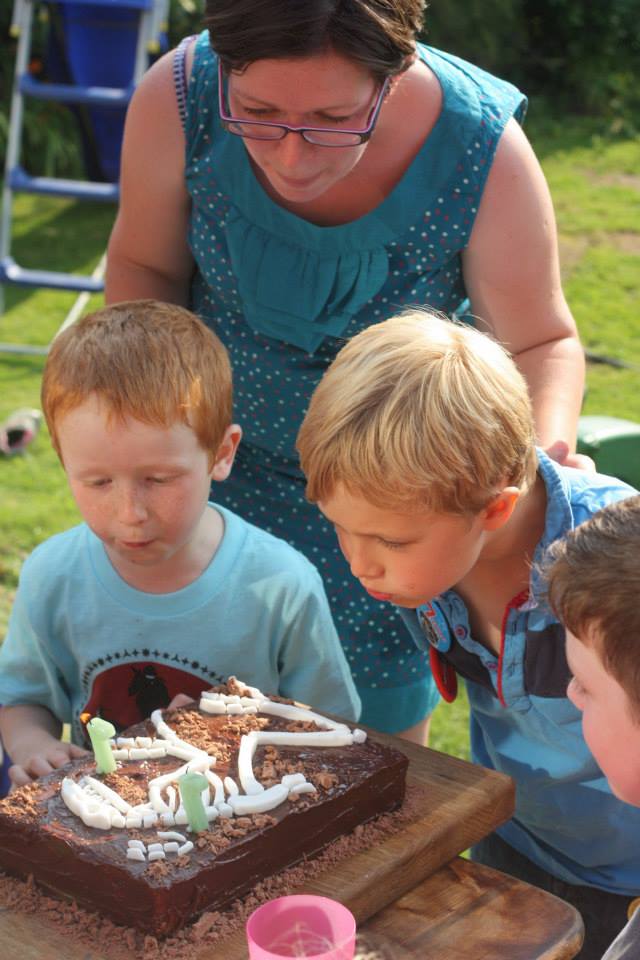 If you would rather a professional Dino team come and run the fun and even have Gregg the Disco Dancing dinosaur himself as a party guest then see the Dino Disco Adventure Challenge party page for more information and to check availability.

Or for a ready made DIY Dinosaur themed treasure hunt to run as part of your party or family event then check out the Dino Ranger Treasure Hunt….Click here to learn more

Otherwise known as ‘Get the eggs to the Dino nests’! Use tennis racquets or similar and decorate tennis balls, use ball pool balls or if the children are very young use foam tennis balls to make it easier. Create a course with a nest at one end. Divide the children into teams and have them run the race as a relay seeing which team can get the most eggs into their nest in the allotted time.

Tip – use plant hanging basket holders for nests – they are cheap, easy to get at the garden centre and look just like Dino nests!

MAKE YOUR OWN DINOSAUR FOSSILS

Buy some Dinosaur shaped moulds or just use normal shaped ones. Make some plaster of paris or to save time and for maximum ease buy a pack from the craft shop.

Put a small plastic dinosaur into each mould and tip the plaster of paris around it.

When they are set take them out of the mould and at the party give each child one with a metal spoon and they can chisel away until they reveal their dinosaur!

This game is best played outdoors or in a large hall space.The birthday child is IT and starts running around the party area trying to tag other kids. Once someone is tagged, they hold hands and continue tagging others. The more people tagged the longer the dinosaur tail becomes! Everyone continues to holds hands in a line as they keep going until the last one tagged becomes IT and starts the dinosaur tail from the beginning.

Before you start prepare a bottle of vinegar with red food colouring.

Each child needs a container such as a plastic bottle cut in half. They also need a larger container to put this in such as a shoebox. Stick the plastic bottle down into the box so that it doesn’t have to be held. Give each child a handful of mud / earth / sand and they can make a volcano around the bottle so that the bottle is disguised and it looks like a mound.

Tip – have more baking soda and vinegar as the kids usually want to do it again!

Buy a batch of air drying clay from the craft shop. Give each child a lump of clay and a selection of plastic cutlery. They can then shape and create their Dino tooth and use the cutlery to create marks and designs on it. Make a hole in each one before they dry and then you can thread a necklace chain or similar through it for them to wear afterward.

Blow up white balloons which will be your Dino eggs and fill them with tiny dino toys / stickers etc.

Divide them into two piles and put them into 2 separate ‘nests’. (create these using sheets swirled together is good)

When the time starts each team has to work together to crack al of their dino eggs before the other team. At the end the team can divide all the small prizes from the eggs between themselves. The team that cracks all their eggs first wins a ‘special prize’.

Cut out large dinosaur shaped footprints. Hide treasures around the party space / house / garden. Place the footprints down with tape as tracks which lead to the treasure.  For older kids the tracks can lead to clues which then have to be solved to reveal the treasure.

Kids know their Dinosaurs! Test their knowledge by printing out images of different dinosaurs. Divide the children into two teams. Hold up a picture of one of the dinosaurs and ask  the players to raise their hand if they know the name of the dinosaur.  Let the first person who raises their hand answer.  If they are right award their team the point, if they are not give the next team a chance to steal.  Whoever has the most points at the end wins!

Gather a lot of plastic Easter eggs and fill each one with a plastic toy or sweet before the party.

The children sit in a circle and pass one egg round while the music is playing. When the music stops whoever is holding the egg gets to “hatch” it and keep the prize inside.  They must now sit out and let the other children try and hatch an egg.  The game continues like this until only one player remains.  They get a special egg to hatch for being the last to be caught with an egg.

Dino, Dino, wake up and look around,

Someone stole your egg, can it be found?

Have a roaring Dinosaur party!!! And if you want our professional Dinosaur team; Ron the Ranger and Greg the Dinosaur to come and lead a stomping good party for you; allowing you to kick back and relax, see our Dino Disco Adventure Challenge party

To make your party or event go with a REAL DINO ROAR…….check out the Dino Ranger Treasure Hunt….Your very own DIY Dinosaur themed treasure hunt game…

20 easy ways to build connection and show your child you love them…..

If you are looking for a way to drag your kids away from their screens, stimulate discussion as a family and make family car journeys an opportunity for connection time, learning and conversation then check out these great Podcasts for kids! Podcasts are popping up all over the place and are more popular than ever…

The leaves are falling, the weather is turning and the nights are getting darker – cue October half term fun with the kids!! So as usual we’ve got our round up of holiday fun activities and events to do with the kids; including free and paid activities; scary and non-scary, day and night; there is…

Whether you are hosting a small Halloween party for your own children or able to invite friends and neighbours over this year, we’ve rounded up some of the best ideas of but we still Halloween fun and games with the kids and make memories! So check out these fun creative ways to bring fun to your kids and home this Halloween. Guaranteed to keep them chilled and thrilled with excitement!