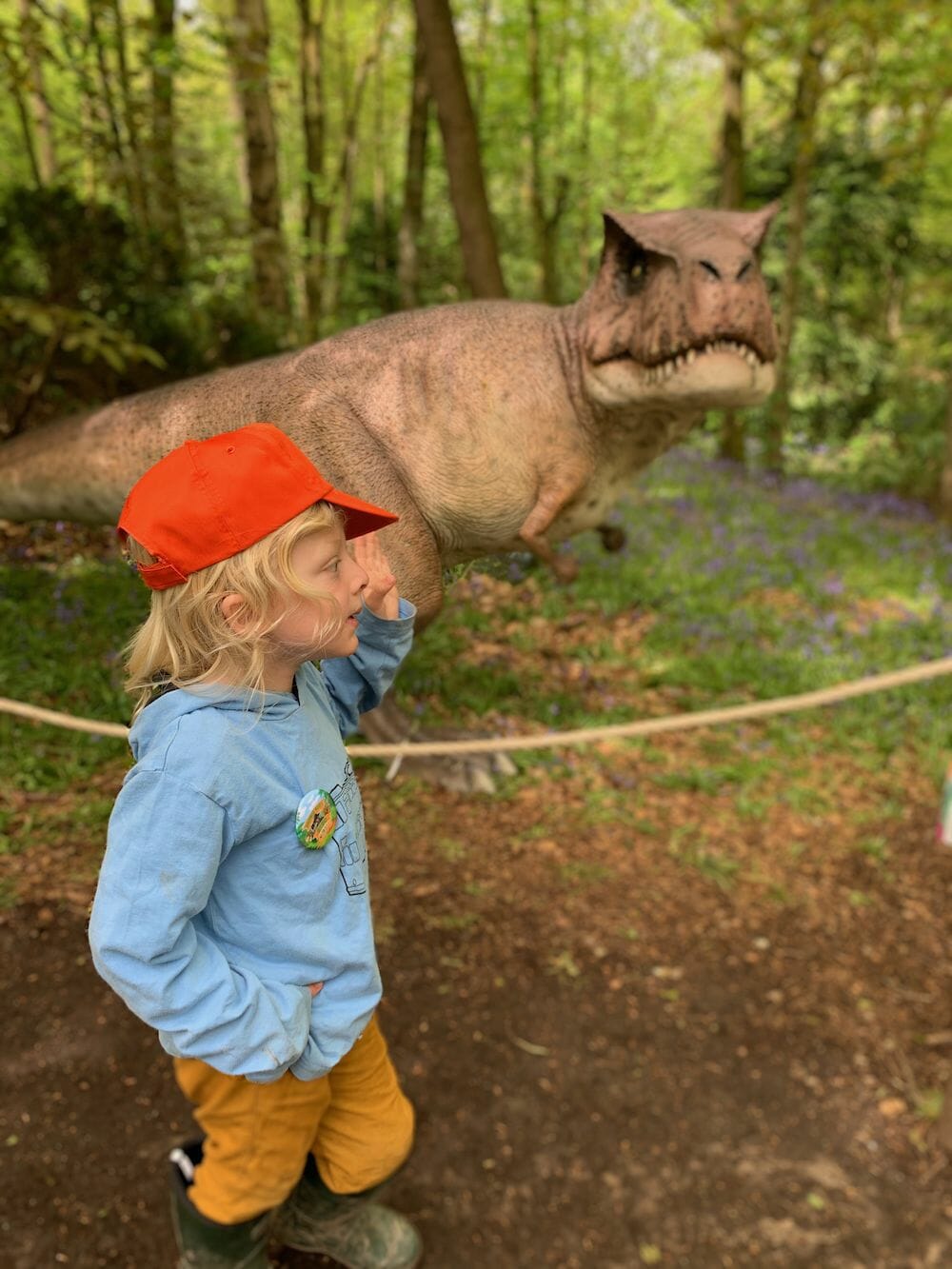 Did you know Dinosaurs are the second most popular interest in children under 5? It’s no surprise then that there are loads of ROARingly brilliant Dinosaur themed parks and attractions to visit all across the UK! So wherever you are, if you have a dinosaur loving kid then you should be able to find some stomping fun! And as we have our very own Dinosaur expert and adventurer with Ranger Ron and his Dino club then we thought if these parks have got his seal of approval then they are worth a family visit!

Often the dinosaur element is just a small part of a wider experience, whereas other places are 100% dinosaur focused. Either way, you’re sure to have a roar-some time at the below attractions!

Here is our pick of best Dinosaur themed attractions across the UK as well as some of the best museums for Dinosaur explorers!

1/ Roarr! Dinosaur Adventure! is in Norfolk and is the UK’s largest Dinosaur adventure park. As well as an amazing dinosaur trail,   it has a maze, high ropes, dinosaur dig, indoor soft play and loads more beside. In summer there is Dippy’s splash zone and in 2021 they have updated a lot of their attractions  and site. Their famous dinosaur trail winds through a wooded area where there are life-sized dinosaurs including a huge Brachiosaurus!

2/ Coombe Martin Wildlife and Dinosaur Park is an impressive, if slightly rustic site which is set into the Devon hillside high above the coastline! (beware the steep car park!)  The park has over 19 animatronic and static dinosaurs with a life-sized T-Rex. The Dino Express train takes you on a short ride through a dark tunnel to the caveman village – and there is a surprise in store when Dave the dinosaur sneezes!

There’s also a small dinosaur museum with real and replica fossils and there is an indoor dinosaurus playzone.

In addition to the dinosaur there are many animals, including lions, tigers, monkeys, sea lions and lots more. There is also a fantastic Egyptian Tomb of the Pharaohs museum which is unexpectedly good!

The dinosaur trail has over 30 dinosaurs to spot in lush settings as you wander along a woodland path and there are lots of other rides and attractions.

This is a great concept of a Dino trail set up in woods, which doesn’t sound much but is done incredibly well with a fantastic array of dinosaur models for the kids to discover along the route. There are also other models including animals and superhero’s. Its not a full day out; the trail lasts around an hour but is an inexpensive, good value trip out for half a day for kids who both love dinosaurs and anyone else too! The locations they stage them in are impressive too, with the North West forest being abundant with bluebells when we visited!

Address: Various sites in the UK including North West, Yorkshire and the Midlands

5/ Torquay’s Dinosaur World is home to some fab full size and scaled dinosaurs and also includes fossils. You can take part in the explorer quiz and even sit on a deadly dinosaur!

6/  Knebworth House is a great big country estate in Hertfordshire with loads of family fun activities including Knebworth Fort which is an amazing play area for all ages,  giant slides and a maze. And there is the house itself. Most importantly however (in our opinion!) is the dinosaur adventure park!

The dinosaur trail takes you past 72 life-sized dinosaurs with information boards, sound boxes to make the dinosaurs roar and there is a big chalkboard where you can draw your own caveman drawings at the end.

Look out for lots of special events throughout the year at Knebworth House too, some of which are Dino themed!

Paulton’s Park is one of the UK’s most popular theme parks for toddlers, mainly down to its fame as the home of Peppa Pig. In 2016 the attraction opened The Lost Kingdom – a dinosaur themed area which has become one of their most popular attractions. Visitors to The Lost Kingdom can enjoy two roller coasters, themed family rides, an adventure play park and encounters with ‘living’ walking animatronic Dinosaurs!

All the Gullivers parks have a Dinosaur element but the park at Milton Keynes  really goes to town on their Dinosaur attractions! There is a Jurassic River Ride, “living” animatronic dinosaurs, a reptile house and a “cuddle corner” for some cute furry encounters. There is also the Potting Shed, where kids can plant seeds to take home, and a Cookery School where they can make some delicious treats using crops grown on the farm. You can even make a short break of it and stay the night here, in a range of themed lodges from JCB Construction Cabins to Princess Suites.

This brilliant park in Scotland has 15 dinosaurs in the dinosaur park as well as lots more dinosaur related activities. Hear dinosaur stories in the Dino Den, take a walk through the dark Dino Mine, bounce on the bouncy dinosaur or dig for fossils. There is also a dinosaur themed soft play centre if the weather isn’t great.

Hoo Farm Zoo is traditionally an animal park that in 2021 opened a Dinosaur park element to it – Hoo-rassic World! There is a woodland walk with over a dozen moving dinosaurs and lots of fantastic facts and ROAR-some adventure to discover!

Pitching itself as “Scotland’s biggest and best dinosaur experience” this Dinosaur Kingdom is located within the beautiful Cairngorms National Park. The kids can meet over 20 moving, roaring, life size creatures, including a 20 foot tall T-Rex! There is also a load of other exciting family, forest adventures to be had, on top of the dinosaurs! Including a Tarzan trail high ropes course, wild water ride, a rollercoaster, nature trails, a maze and a tropical hot house. There is plenty here for a full day out for all ages!

This is an all-weather family attraction and aims to provide a fun, interactive and educational environment for everyone to get back to nature. There is a diverse range of activities for all ages including go karts and a beach area;  soft play and a Dino Land train. As well as all the dinosaur themed attractions, there are plenty of opportunities to get hands on with some real wildlife, including Pond Dipping, Bug Hunting, Meet the Farm Animals and a Lemur Walk. A great family day out for children who love animals and wildlife as well as dinosaurs!

The National Showcaves Centre is a totally unique attraction with so much to offer for families. Located in the Brecon Beacons National Park, it boasts three attractions in one – a trio of ancient, beautiful natural caves to explore, a Dinosaur Experience and a Farm and Shire Horse Centre. So there really is something for everyone at this dinosaurs parks. For parents there is breathtaking caves, waterfalls and natural scenery, while kids can marvel at the 220 life-sized dinosaur models scattered around the site. There are two indoor play areas and you can meet the gentle shire horses, sheep and alpacas.

14/  Paradise Wildlife Park in Hertfordshire is home to the amazing World of Dinosaurs which is one of the best animatronic dinosaur parks in the UK. There’s a very impressive Jurrasic Park style entrance. The walk takes you past moving and roaring dinosaurs and you’ll be able to hop in a jeep for a great photo opportunity recreating the scene in Jurassic Park with the T-Rex chasing you.

This park is not only dinosaur attraction. It is a zoo with lots of animals like white lions and tigers and the UK’s biggest anaconda.

The ultimate indoor Dinosaur play centre; Dinostopolis is located within Bluewater Shopping Centre and offers hours of indoor fun. There are three storeys of soft play, interactive activities and fun challenges, suitable for a wide range of ages. It’s a bit more than your usual soft play and if Dinosaur loving kids are in the area they are in for a treat of a playtime!

Dinosaur Isle was Britain’s first purpose-built dinosaur attraction. There are life-sized dinosaur models amongst a recreated landscape and there’s even a robotic dinosaur that visitors can control.

There are so many great dinosaur themed museums around the UKand they are great places to visit on a rainy day and are also highly educational. Your four year old may know it all already, but we can guarantee you’ll learn a lot! Some of the museums (the Natural History Museum in London) also have a large moving T-Rex as well as their collection of dinosaur bones and fossils. Here are a selection of the best museums that include Dinosaurs in the UK…..

If you are reading this then the chances are you have a child who loves their dinosaurs and so they will ant to know about Dino Club with Ranger Ron (if they don’t already!)  It’s totally free to join and it packed full of Dinosaur themes activities, fun, online events and even a badge challenge programme that your young ranger can work through.

Best places to go for days out with the kids…… If you are looking for inspiration for days out and place to go with the kids; from home or when you are travelling around the UK, on a family staycation or visiting family or friends elsewhere in the UK, check out our handy map for…

We love a family festival – whether you are a hardy camper or a day tripper the UK has some brilliant festivals that cater for families where you can go and enjoy creative and imaginative play, shows and experiences together. I think that being outdoors and disconnected from the usual humdrum for even one day…

September is here which means most of the summer festivals have been and gone for this year, but what’s it like to go to a family festival with the kids? Have you wondered about going but have not been sure what its like or if they / you would enjoy it? Well, see the video…

The Wonder Adventures Family learn about family Christmas traditions from Victorian times…what did we learn about ourselves and our Christmas and the traditions that are important to us today… As a family who have run and sold children’s Christmas events, activities and products for many years; when we were asked to take part in Channel…

If you start to blast out Christmas songs in November, invariably you get someone within minutes telling you ‘it’s too early’ and ‘you shouldn’t even be thinking about Christmas until December” and other varying phrases at different levels on the grumpy “don’t say the ‘C’ word yet! But for us, as soon as the last…

A fun quiz for Halloween…is your child potty about Potter? Take our fun quiz and find out which Harry Potter character they are like from how many they get correct…. If your child loves Wizards then why not download the Hocus Pocus School of Wizardry Treasure Hunt game for them to do in half term…