Most pre-schoolers go through a Dinosaur-mad phase! Studies even show that while the most common intense interest in pre-schoolers is vehicles – planes, trains, and cars – the next most popular, by a wide margin, is dinosaurs. 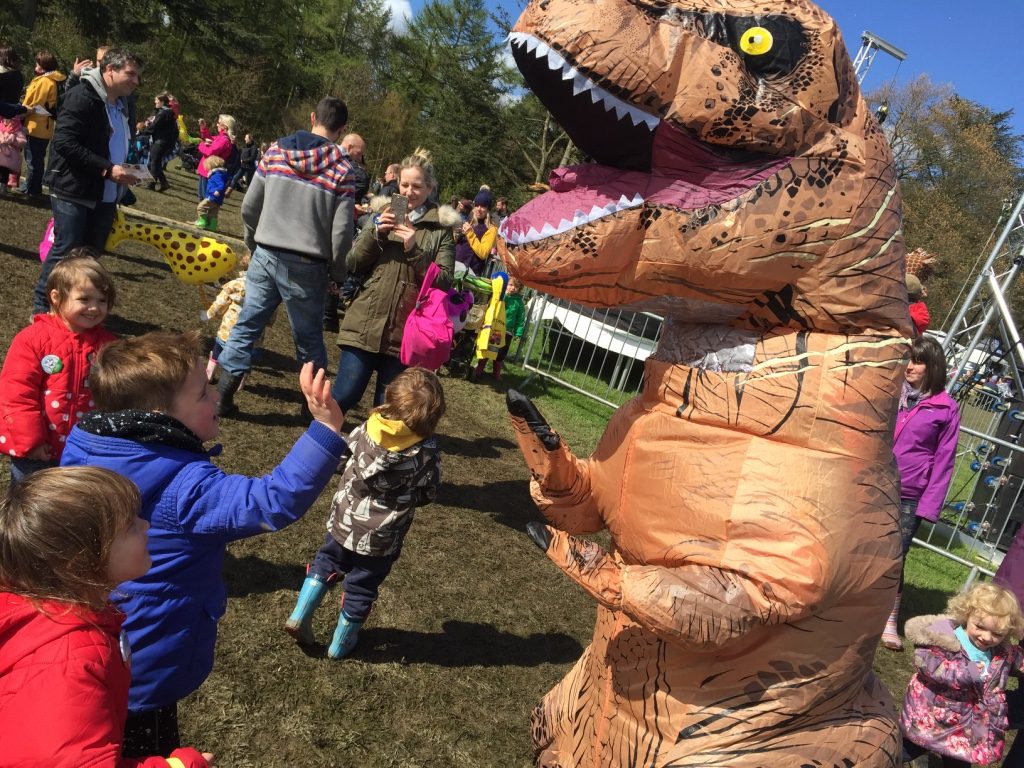 Sometimes the craze happens as young as two or three, when an articulate tot manages to pronounce the word “tyrannosaurus” before he can wrap his mouth around “please” or “thank you.” Often it happens a bit later when kids are just starting to come to grips with scientific concepts and can differentiate the appearance and behaviour of dinosaurs from the wildlife they see at the zoo.

It’s such a familiar craze that I think a lot of us forget how weird it is that children even like dinosaurs in the first place!

So why, exactly, do kids love dinosaurs so much?

Dinosaurs are the ultimate child fantasy. They’re like dragons, but real. OK. The visual splendour of a towering T-Rex cannot be disputed! And, to a tiny tot, the sheer size of them makes them the ultimate untamed entities, which only makes a kid want to identify with them more. And when you are told that your favourite toy dinosaur was actually the same size as three double deck buses, it makes it so real and yet so enormous to a young mind!

Also, when playing with dinosaur toys or reading Dinosaur books together, the sheer size of these beasts, tamed and placed into a book, gives the child reader power over these monsters which is incredibly intoxicating! Suddenly the kid is the one who can determine whether the dinosaur stays on the shelf or comes down to play. For someone small, who is constantly at the mercy of the adults around them, dinosaurs (which belong only to children and almost never to grown-ups) provide the ultimate in escapism.

As we’ve already indentified Dinosaurs are generally big (ok not all species but the ones that kids like best are!) which makes them scary. However they are also dead; which makes them very safe! So ironically they’re huge and fiercesome – and completely not a danger to the child.

The trick is to be scared just enough, but not too much. Imagination is what gives them life and the child is in charge of that.

The average Dinosaur crazed kid may have only a vague idea when dinosaurs went extinct, but she knows, for a fact, that they’re no longer around. A full-grown Tyrannosaurus Rex, no matter how huge and hungry, is thus rendered completely harmless, since there’s no chance of accidentally running into one during a nature walk!

3. YOU DON’T ARGUE WITH A DINOSAUR

Dinosaurs represent, in kids’ minds, the ultimate kid principle: when they want something, they go out and get it, and nothing had better stand in their way!

It’s much easier for a parent to deal with a kid pretending to be a fierce Brontosaurus as they can be allowed to be hyperactive, let off steam and have an element of disobedience within the world of make believe play. And it’s much easier for us  to parents to deal with a pretend dinosaur than a human kids having full blown toddler tantrum. So to re-frame a tantrum as a pesky, hyperactive Dinosaur could save many a grey hair!!

Books like Dinosaur vs. Bedtime exploit this dynamic perfectly; by the last page, the dress-up dinosaur has finally settled down for a night’s sleep, after winning a series of dramatic battles against a playground slide, a bowl of spaghetti, and talking grown-ups.

4. THEY HAVE NAMES THAT ARE LIKE ANOTHER LANGUAGE…BUT MOSTLY END WITH -AURUS!!

Dinosaurs, in reality, are mere bones in museums with long Latin names and yet, whilst giving most 4 year olds a list of Latin verbs would result in a look blanker than a landscape being approached by a T-Rex, but give the same 4 year old a list of Latin dinosaur names and he can very likely not only pronounce each one but tell you how many metres long it is!

When palaeontologists of time gone by of seriously engaged in bone wars for fossils, one has to seriously doubt that they had any inkling that the fruits of their labours would lead to dino-obsessed three-year-olds for generations to come!

They are incredibly crazy looking, and new ones are discovered all the time. Their very image and size inspire awe. Any child who is curious and observant can dream up their own ideas about what these extinct creatures looked like and how they may have acted.

6. THERE IS SOME SCIENCE AND SOME REALITY WITH THEM

In contrast to most magical creatures that we read about in books and see on TV and in films with our kids, Dinosaurs actually existed. In this way Children can see how science often gives us a world even more spectacular and amazing than our imagination can ever create.

The love of dinosaurs, turns these children if only for a moment, into scientists. For great numbers of children, Dinosaurs introduce them to non-fiction books. A child might go from the very clever “Uneversaurus” by Aidan Potts to other topics that interest them. Maybe they’ll start to delve into sharks or knights or almanacs of facts. However they go about it, suddenly non-fiction is feeding their interests like never before.

There’s so much information; so many species, periods of time, fossils, bones; and it is all so exciting and inspires imagination through Science!

And then, like all childhood interests, Dinos make way for other toys. Kids are expected to grow out of them, just like they’re supposed to grow out of LEGO or princesses or fairy wings. Dinosaurs are often seen as a babyish craze as kids move on to other interests.

But the great thing with Dinos is that sometimes, when they think no one’s looking, they come back. They’ll play with the dino toys they handed down to little brothers and sisters. They’ll tear through Dinosaur! by Peter Sis and smother their giggles. They’ll surreptitiously read I’m Bad by Kate McMullen to their younger siblings and pretend that they’re doing it out of the goodness of their golden glorious hearts. They’d sooner die than confess that maybe, sometimes, dinosaurs can be pretty cool. Especially the ones with the fangs and the claws and the blood!

There are some great books that Capture all that kids love about Dinosaurs perfectly…..

Goldilocks and the Three Dinosaurs by Mo Willems.

And no childhood is complete without the marvellous Harry and his Dinosaurs!

And lastly Sid Hoff’s wonderful Danny and the Dinosaur takes you practically into adulthood.

If your Dino Crazed little person wants to come and meet Gggreggg the Disco Dancing Dancing then bring them to The Dino Disco Adventure Challenge this Easter in Manchester ….it’s roaring good fun!!